Market Spotlight: Distressed Deals in EMEA – Will History Repeat Itself?

European dealmakers find themselves in a uniquely challenging position. Though other regions are also contending with rising inflation, supply chain problems, and the risk of economic recession, the direct and indirect consequences of Russia’s invasion of Ukraine are felt most intensely in Europe.

The maelstrom of negative shocks risks souring the successes enjoyed by dealmakers in 2021, with restructuring and distressed M&A likely to become a fixture this year and next.

Parallels and Differences
There are some parallels to be drawn with the last global economic emergency, the 2007-08 financial crisis. In Q2 2007, M&A in Western Europe reached its zenith, recording US$545bn worth of deals. Dealmaking cratered in the following two years, hitting rock bottom in Q2 2009 with US$64bn worth of deals, according to Mergermarket figures.

Last year, thanks to the release of pent-up demand post-pandemic, EMEA M&A skyrocketed. The aggregate value of deals in the region was just under €1.4tn, an all-time high and a 74% increase on 2020, driven in great part by high levels of TMT and industrials activity. There were just over 11,000 deals in total in EMEA in 2021, representing an increase of 43% from the year before and another single-year record.

Moreover, between early 2007 and mid-2008, soaring commodity prices put tremendous pressure on companies. The price of Brent crude rose from around US$60 per barrel to almost US$140, per Trading Economics. In June 2022 it is hovering between US$110 and US$120 per barrel. So, while events and issues of 2007-08 and today are not identical, dealmakers should be mindful of history’s lessons.

This year’s macroeconomic stresses are yet to generate a surge in insolvencies or distressed M&A...but troubling signs are emerging.

Ripe for Restructuring
Then as now, higher operating outlays and the strain on corporate cashflows risked throwing many organizations into distress. This was compounded by a deterioration of borrowing conditions following an ‘easy money’ period when debt financing was cheap, similar to the period of monetary easing and fiscal stimulus that supercharged M&A in 2021.

This year’s macroeconomic stresses are yet to generate a surge in insolvencies or distressed M&A – after all, we are only at the beginning of the monetary tightening cycle, and recession isn’t forecast until later this year or early next. But troubling signs are emerging.

In the UK, for instance, several key indicators are trending in the wrong direction. According to data from the Insolvency Service, 4,896 UK companies went bankrupt in Q1, up from 4,627 in Q4 2021 – the quarterly average between 1975 and 2022 is 3,635 bankruptcies, with Q4 2008 setting the single-quarter record with 6,950. Meanwhile, the Confederation of British Industry has reported that manufacturing optimism fell to minus 34 in Q2 from minus nine the previous quarter—the lowest level since April 2020—and the manufacturing purchasing managers index published by the Chartered Institute of Procurement & Supply dropped to a 23-month low of 53.4 in June.

The circumstances today are not identical to those from the global financial crisis in 2007-08. In some respects, conditions in 2022 are even more volatile, given the ongoing impact of the COVID-19 pandemic and geopolitical volatility. But it can also be argued that the markets have adapted well to the current uncertainty.  In any case, for dealmakers, the maxim that “history doesn’t repeat itself, but it often rhymes” is worth bearing in mind.

Ready for Your Next Deal?

No matter what type of deal is around the corner, make sure you're deal-ready. Use our next-generation data room to deal faster and smarter. Contact your client representative or request a personalized demo. 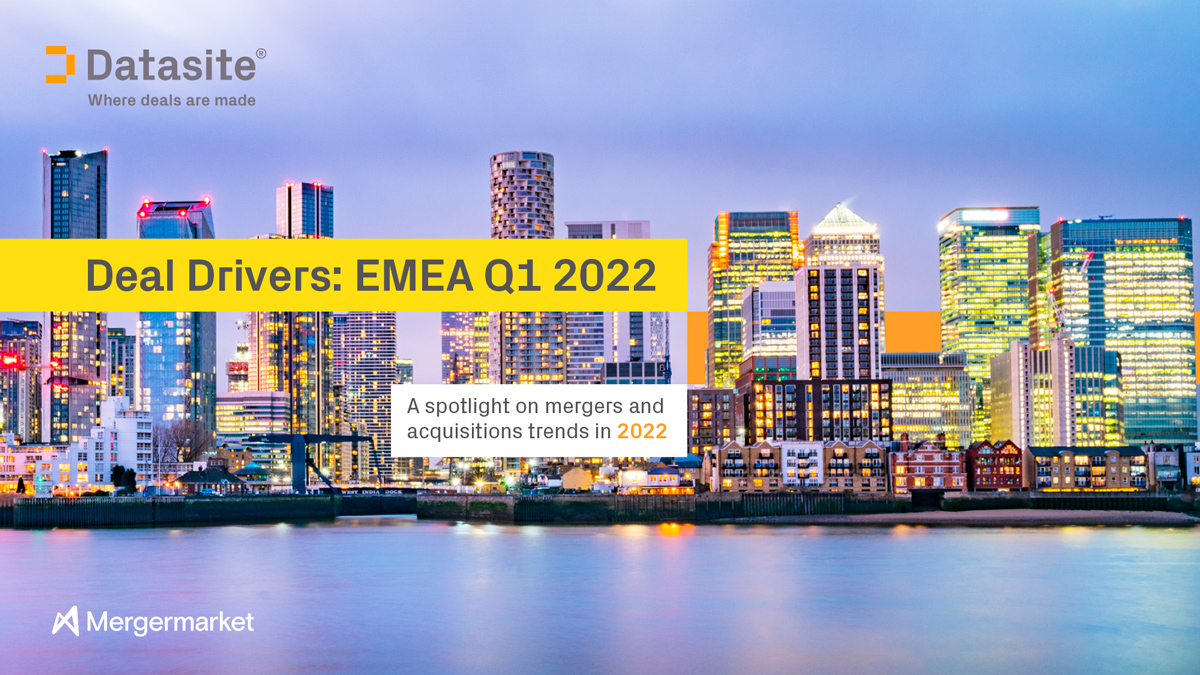 Dealmaking Trends Across the World

If you'd like to see how M&A is faring in other sectors and regions, check out our other Deal Drivers reports from EMEA, APAC, and the Americas to gain the latest insight into dealmaking.