Analysis by Mergermarket, an Acuris company owned by ION Group

Southeast Asia M&A deals have bounced back strongly as private equity players lead cross-border activity, given increasing openness from companies to take on PE investment amid difﬁculty in accessing capital, according to industry experts speaking at a webinar hosted by Datasite and Mergermarket on 29 July.

In 1H21, Southeast Asia saw US$85bn worth of deals compared to US$31bn a year ago underpinned by blockbuster technology deals such as Singapore-based ride-hailing giant Grab’s merger with US special-purpose acquisition company (SPAC) Altimeter Growth and the Gojek-Tokopedia merger in Indonesia, according to Sumit Punwani, partner, corporate ﬁnance and deal advisory at KPMG.

This year may be the busiest yet for M&A in Southeast Asia with a lot of premium deals but also a good spread of deals across the value chain, said Jamie McLaren, partner at Herbert Smith Freehills. The Philippines and Indonesia are among the most active markets. 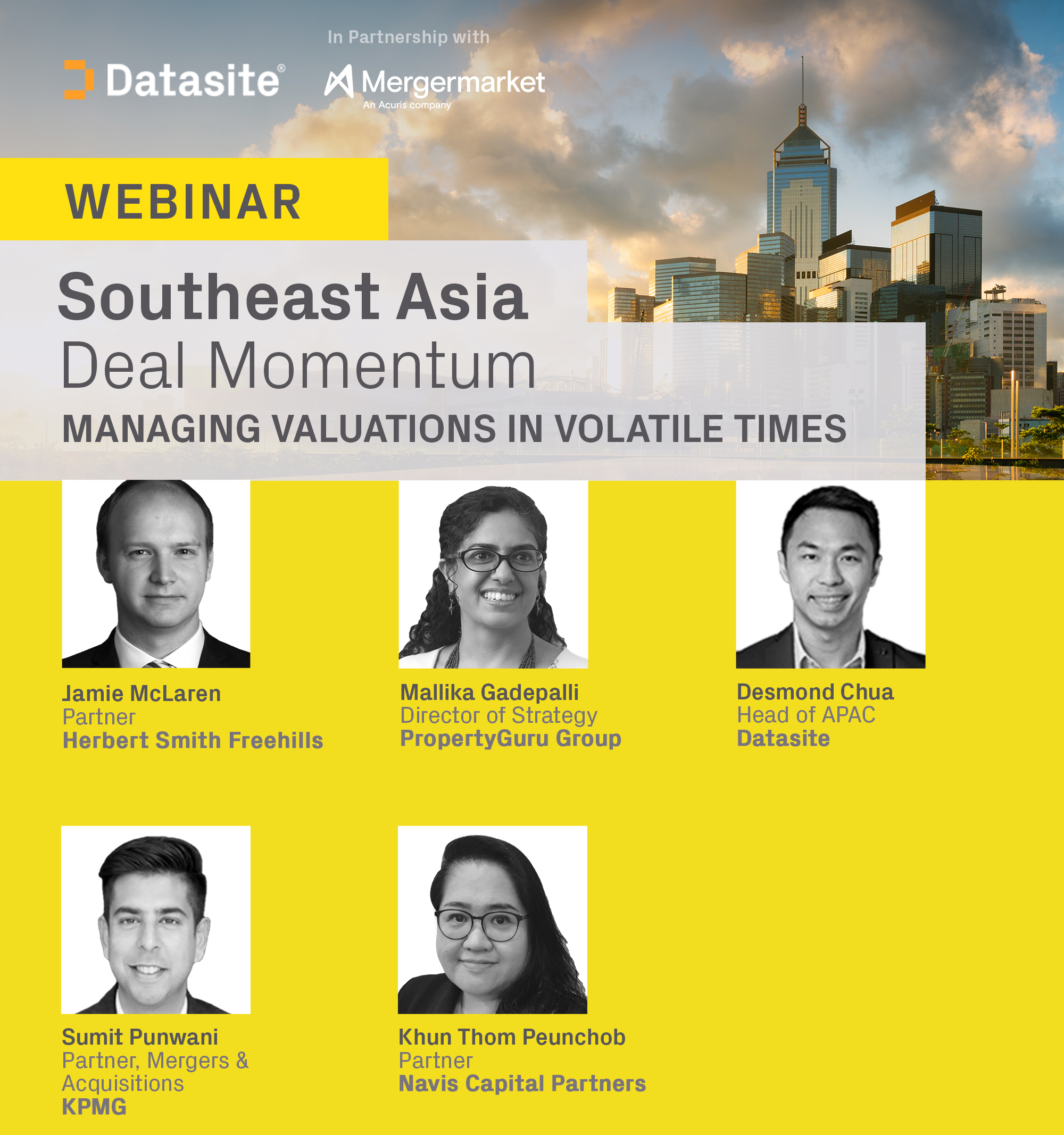 As dealmakers gain more clarity on the impact of COVID-19, they have become increasingly comfortable to resume deals and come up with reasonable assumptions on valuation, noted Khun Thom Peunchob, partner at Navis Capital. M&A activity remains very active in the region even as the new wave of coronavirus infections threatens to cause some delay and difﬁculty in completing transactions.

Companies have become more receptive to PE investments because it has not been as easy to secure funding like they used to before the pandemic, according to Khun Thom. PEs, however, have been more discerning in deploying their dry powder as COVID-19 changed their investment thesis on some sectors and affected the timing of exits on their portfolio companies. Navis Capital is evaluating emerging sectors that opened up for potential investments during the pandemic, but it will only pursue an acquisition if the long-term beneﬁt ﬁts into its strategic plan, she continued.

Khun Thom noted PEs have been more prominent in bid processes across the region as strategics focus on consolidating their leadership in their respective markets. Corporates are taking advantage of opportunities to acquire domestic competitors needing capital, which would not have been available in the past, she added.

KPMG’s Punwani agreed, saying that in the past, auctions have attracted an equal spread of PEs and strategics, with the latter having the edge in outbidding PEs given their long-term view on assets.

Local champions and ﬁnancial sponsors that have in-country presence are in a more favorable position to take the lead on transactions, relegating those that do not have a domestic presence to co-investor or follow-on roles, Herbert Smith Freehills’ McLaren noted.

SPACs have made late-stage funding rounds of high-growth companies, particularly in the tech sector, more appealing to PEs because of the potential for accelerated exit, Herbert Smith Freehills’ McLaren said. For attractive targets, sellers were able to put pressure on PEs to agree to certain terms before exclusivity periods end because there are several bidders waiting in the wings.

In 1Q21, SPACs took off because it provided companies especially direct-to-consumer tech ﬁrms a viable exit option, given the faster timelines and the opportunity to work with experienced management teams, according to Desmond Chua, head of Asia Paciﬁc, Datasite. While increased regulation has dampened the enthusiasm for SPACs, the intense scrutiny will translate to better companies tapping this alternative route to go public.

SPAC processes are currently linked to the US, but some exchanges in the region like the Singapore Stock Exchange have started discussions to accommodate them, PropertyGuru Group Director of Strategy Mallika Gadepalli said. This is creating excitement for Southeast Asian startups because it supports their aspiration to secure growth funding and have the prestige of becoming a listed company.

Herbert Smith Freehills’ McLaren is seeing a lot of M&A activity in the technology and digital infrastructure sectors, particularly on data centers and towers as market participants get into position for the rollout of 5G technology. Renewable energy is also a sector of key interest as big tech players invest in late-stage or early-operation projects because of their high energy requirements and support of their ESG targets.

As the world emerges from the pandemic, dealmakers are assigning greater importance to issues such as ESG, Datasite’s Chua noted. He cited a survey early this year that showed two-thirds of M&A professionals consider ESG risks climbing higher in their due diligence checklist and more than half believe that ESG issues can derail the completion of the deal.

Datasite’s Chua also sees companies embarking on M&As to drive their digital transformation strategy as the pandemic forces them to change their way of doing business.

PropertyGuru was able to take advantage of the reasonable valuations and managed to complete an acquisition in Malaysia, MyPropertyData, because of its strategic approach, Gadepalli said. As the company had clearly deﬁned its strategic goals, when attractive opportunities came up in its key growth areas of data, ﬁntech, and developer software, it was ready to explore these targets despite COVID.

Communication tools have allowed dealmakers to continue negotiations and even shorten transaction timetables, but they may not help as much in overcoming the ﬁnal few issues of negotiations when physical meetings are important to reach consensus, Herbert Smith Freehills’ McLaren pointed out.

Navis Capital’s Khun Thom said dealmakers have adapted to the demands of virtual due diligence amid mobility restrictions, but this cannot replace in-person meetings that are crucial in building relationships with sellers.

Spending time with them is necessary to form chemistry and avoid the possibility of engaging in a competitive bidding war and paying a steep price for an asset.

PropertyGuru’s Gadepalli agreed, noting that the proptech startup faced a situation in its deal where it became important for key decision makers to meet face to face and negotiate. Without that, the timeline of the deal would potentially have been delayed. The inability to conduct face-to-face meetings creates risk in sensitive negotiation situations and could become an obstacle in cutting across cultures and building trust, she said.

Another challenge for dealmakers is securing government and regulatory approvals given the varying work-from-home arrangements across different markets, McLaren added.

This webinar coverage article was originally published by Mergermarket on August 11, 2021; it has been republished with permission. 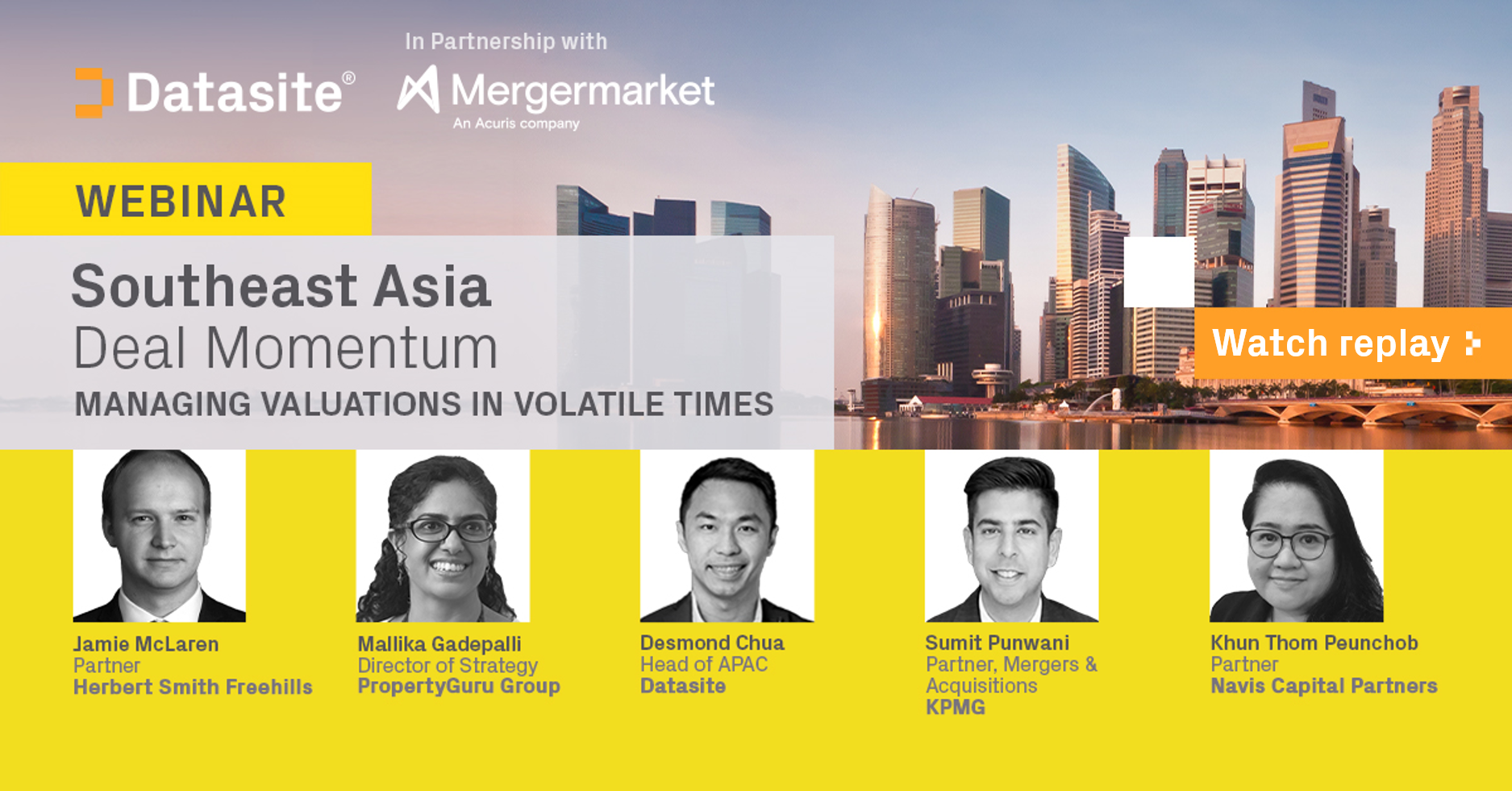 Find out what the experts had to say about M&A trends in Southeast Asia, as well as discover the hot sectors for dealmakers.

If you'd like to see how M&A has fared around the world, check out our other Deal Drivers reports from APAC, EMEA, and the Americas to gain the latest insight into dealmaking.