Multiple drivers have fueled the momentum in China’s post-COVID M&A landscape, and are expected to continue to drive deal flow this year, including the Chinese government’s dual circulation initiatives, multinationals’ carve-outs, low-cost financing, SPACs boom, and others, according to industry experts speaking at a webinar hosted by Datasite and Mergermarket in March.

M&A insights from the experts

Since Q1 of this year, strong momentum in dealmaking has been seen in mainland China, particularly inbound deals, which is primarily driven by the huge liquidity in the market, including cheap debt financing, and sizeable sponsor-driven activities, such as SPACs, said Lei Li, Citigroup’s managing director for mergers & acquisitions in Asia Pacific. Beijing’s dual circulation policy will expedite the domestic consolidation and create local champions, particularly in the sectors that are driven by technology, such as biotech, artificial intelligence (AI), semiconductor spaces.

Echoing Li, Raymond Goh, China Tourism Group Corporation’s group general counsel, also expressed cautious optimism, saying that M&A dealmakers have seen the light at the end of the tunnel, especially when mainland China and Hong Kong are getting to grips with the coronavirus situation. He also suggested that it would be a good opportunity to acquire and consolidate well-managed companies or even startups, which are facing a temporary cash crunch or highly dependent on a certain product line that is badly affected by the pandemic. 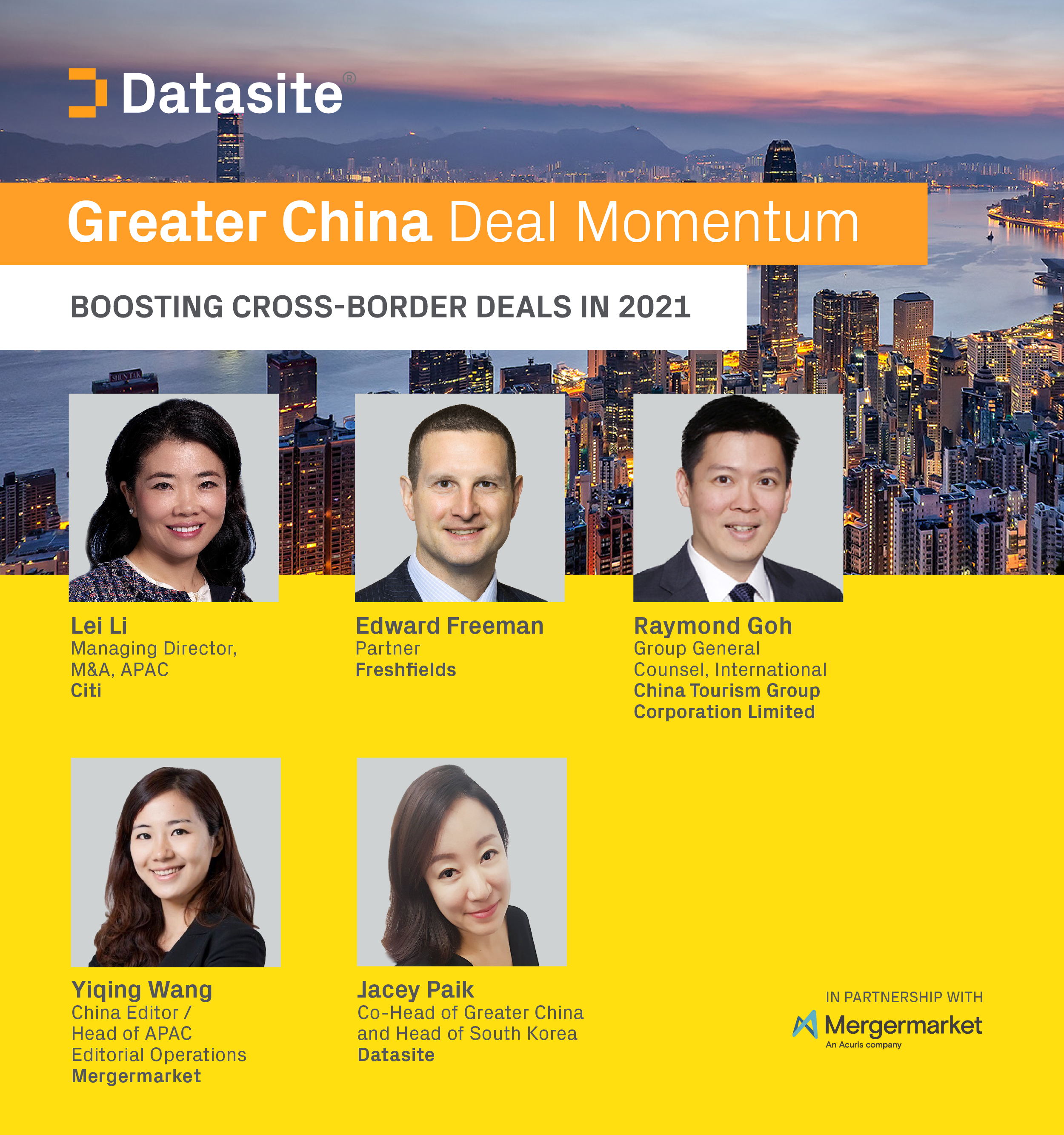 More of domestic deals have been driving the activity last year, which coupled with a large pool of companies from startup to pre-IPO that are eager for investment for growth, said Jacey Paik, Datasite’s co-head of Greater China and head of South Korea. That will remain as one of the key drivers in 2021.

Meanwhile, the multinationals will continue the corporate divestitures in China, when they well reposition China’s presence and optimise global footprint as their strategies, Li added. However mainland China’s outbound deal flow is expected to remain constrained due to geopolitical tensions and pandemic concerns, Li said.

Edward Freeman, partner at Freshfields, added that regulatory changes are seen on the investment regimes every month either from the US, the EU, the UK, Australia, or India, which remains a mixed picture overall.

He also pointed out that the UK is anticipated to be more investment-friendly than other jurisdictions, on the backdrop of Brexit, while the Biden administration has made a considered start and is expected to keep its consistent approach, which could facilitate dealmaking, although the situation is still difficult for Chinese buyers in the US.

In the post-COVID market, Chinese big tech giants are looking into expanding their portfolios into subsectors, such as health tech, education tech, and fintech, said Paik.

Despite potentially increased regulatory scrutiny in China, the US, and the EU, Freeman would still expect to see the likes of Alibaba and Tencent being very acquisitive, rather than stepping back substantially from their M&A activities. “There might be more oversight, but only the larger deals might become slightly more challenging,” he said.

Amid the Chinese government’s recent scheme to invest in digital infrastructure, which is going to be notable in 2021 and the coming years as well, we will see a lot of capital coming into and a lot of movement in the related sectors, including 5G, industrial Internet, data centres, AI, new energy vehicles, charging stations, and all of that, said Paik. Although some sensitive sectors are not completely open to foreign investments, most are being opened to private investments and partially foreign investments as well, she added.

There were 18 Asia-sponsored SPACs listed in the US in 2020, while this year has already seen 15 Asia-based SPACs filed in the US, according to data by Dealogic*.

Earlier this month, Grab Holdings, Southeast Asia’s ride-hailing and food delivery unicorn, said it would go public via a merger with a US-listed SPAC in a deal that would value the company at about US$39.6bn, marking the biggest SPAC merger ever.

SPACs allow a surging number of new unicorns to shine because SPACs do not limit them from discussing or showing the forecast versus IPO. Apart from showing historical financials, the new and upcoming unicorns can talk with sponsors, who are sophisticated investors, about their long-term business plans and base their valuations on future growth, Li said. The sponsors’ economic interest could be aligned with the projected strong future to make the deal work, she continued.

Meanwhile, it is necessary to keep SPAC transaction speeds on a sustainable basis, given that any potential blow up due to too fast deal closing should be avoided, Li said.

Although the US is ahead of China and the rest of Asia, Asia-based sponsors have a very strong edge to play in the SPAC market, with so many upcoming unicorns in China, Southeast Asia, and other Asian regions. When introducing China or Asia-based targets to US sponsor-backed SPACs, it took them a longer time to understand the Asia or China stories, compared with on-the-ground sponsors, Li said. Asia-based SPACs are much better positioned to identify local champions and bring the Asia-based unicorns to US public markets, she added.

Moving quickly is key to successful dealmaking, including getting advisors on board, starting a discussion going, in a word, wrapping things up quickly, given that there is huge liquidity waiting in the market, said Goh, echoed by Paik.

The deals that get done quickly are not necessarily at a high premium, but are those where you know the partners, the counterparties, and the sectors beforehand, because it is unlikely that you can go down to the physical offices or factories due to the pandemic, Goh said. The ability to identify, close, and negotiate deals quickly and virtually ideally would be expected, which will be a huge advantage in a high-liquidity market, Goh said.

It is critical to have a good sense and knowledge of whether business partners or the targets are reliable, and how solid their books, their numbers, or their businesses are, Goh said. “It's never a case of learning something for the first time.”

Agreeing that time is of the essence, Paik believes that dealmakers will continue for a long time to conduct transactions remotely, which requires the right infrastructure and tools, such as online due diligence or negotiation platforms, to facilitate and adapt to a rapidly changing environment.

It will be essential to have the ability to deploy people in different jurisdictions, and to have a well-established and strong network in the sectors to help get deals done at the moment, Freeman added.

“We even hired local industry consultants who can provide the necessary physical services, including conducting onsite due diligence work," said Li from Citi.

*Dealogic and Acuris are owned by ION Group.

This webinar coverage article was originally published by Mergermarket on April 16, 2021; it has been republished with permission.

What will drive M&A market activity the most in 2021? What will be the most important success factor in M&A? Which key area of M&A would be the most enhanced by technology? Get the answers and more from dealmakers on the ground across Greater China.

What other APAC M&A deals made the headlines last year? Which sectors and countries saw the top bidders and values? Where do the opportunities lie going forward?

If you'd like to see how M&A has fared around the world, check out our other Deal Drivers reports from EMEA, APAC, and the Americas to gain the latest insight into dealmaking.